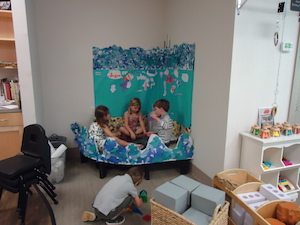 During the Pre-K’s exploration and investigation of sand, Ms. Alex observed the students’ interest in different animals that are found in the sand, both at the desert and at the beach. The students named several animals including sharks, turtles, kangaroo rats, dolphins, crabs, jellyfish and camels. As a class, we began discussing where each of these animals lives. “Do all animals live in the same habitat?” “What makes their habitats different?” “Are all animal habitats made of the same materials?” “Does more than one animal share a habitat?” “What kinds of items are found in an animal habitat?”

Through research the class discovered that there are many different animal habitats. Some of these habitats were a forest, jungle, ocean, grassland and desert. The class decided to begin their exploration of habitats by exploring the ocean.

While investigating the ocean habitat, Ms. Alex’s class found that there are over 300 different species of sharks that live there. Many students thought that all sharks are “mean and scary,” but after doing some research, the class found that most sharks are not scary, and will just leave you alone if you do not bother them. The most dangerous sharks, that the class has discussed, are the Bull shark, Great white shark and the Tiger shark.